Aamir Khan no longer the face of Incredible India

Bollywood superstar Aamir Khan is no longer the face of Incredible India - Union Tourism Minister Mahesh Sharma has announced that Aamir Khan has ceased to be the mascot for the ‘Incredible India’ campaign after 10 years.
While many might see this removal as a result of his comments on the intolerance issue, the tourism ministry has clarified that they had not hired the actor. The hiring was done by an agency. Since the contract with that McCann Worldwide agency no longer exists, automatically Aamir's contract is no longer valid.
This has been reported in indianexpress.com dated 7 January 2016. 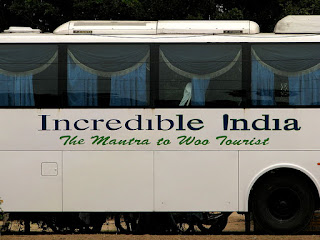 McCann Worldwide agency had been given the contract for the ‘Atithi Devo Bhava’ campaign. They had hired Aamir for the job and, since the contract with the agency is over, Aamir is out. In his connection, Aamir has said that he respects the decision of the government to “discontinue” his services and has also made it clear that he has never charged anything for the task.
The new brand ambassador could be Amitabh Bachhan.

Moody gifts his neighbor a turban on his birthday (satire)


Use online honey trappers to test the fidelity of the spouse

Migrants ready to pay £1,200 to people smugglers for trip across Channel in UK-registered car

US airdrops 50-tons of ammunition for M-16s and AK-47 to Syrian fighters
Posted by prabir ghose at 7:31 AM