Filmmaker James Cameron has confirmed that 'Avatar 2', sequel to 'Avatar' of 2009 expected to release on Christmas Day of December 2017. THis is being touted to be the beginning of a trilogy of “Avatar” sequels and the movie would arrive in the holiday, just like the original film.
This has been reported in indianexpress.com dated 23 December 2015. 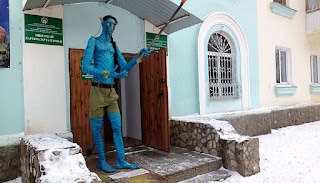 A Cameron has said - his target is Christmas of ’17 as announced but, the fact is that when all the three films done are completed, they will be released at one year intervals. In his words, it will be a meta-narrative that runs across the three movies. While each dies stand alone, it is all a part of one much larger story.
61-year-old filmmaker James Cameron has also revealed that work on creatures and landscapes is almost done. That is a major achievement - the designs of creatures and landscapes and the new worlds within the world of Pandora are more or less finished. It has taken nearly two years.
Cameron has also indicated that the writing is ongoing, but almost finished, technical development is done as are the stages and infrastructure. In fact, things are poised to start after the first of the year.
Sam Worthington and Zoe Saldana of the original 'Avatar' will be reprising their roles.

Rice on rooftops – a masterplan (satire)

Didi to gift soaps and towels to kids (satire)

Saraswati and Lakshmi and their girlish talks (satire)


Juhi Chawla learns how to ride a scooty

Thieves make away with sandalwood trees from Santiniketan

76% of butterflies vanishing in Britain - a result of climate change

Scotland Yard launches biggest ever crackdown on guns in London